Write what you know, ever heard that advice before? It helps to locate and ignite an author’s passion. Ona Russell, the California Writers Club, Inland Empire Branch, February speaker, found a scrapbook of articles about her great-grandfather, a celebrated judge in Toledo, Ohio. Intrigued, Russell’s research unearthed family secrets and inconsistencies. Her own mother’s birth date was incorrect, the judge struggled with mental disorders, and a mysterious lady, Sarah Kaufman, legal assistant to the judge, appeared in many photos. Russell fell in love with these uncelebrated personalities from the past. Eventually, Sarah Kaufman became a sleuthing protagonist in Russell’s own historical mystery novels, a trilogy set in the 1920’s.

Part of her storytelling is true, based on the articles. Some of the storytelling is fact, based on research, but Russell worked hard to highlight the “slant,” the re-invented tensions and conflicts. Russell explained that excitement is created in the margins of the truth, in the details, in the spots where the story pauses and shifts gears. Generating a narrative from this blend of truth, fiction and fact is a tricky balance for writers, whether the works are memoir, science fiction, fantasy, or historical fiction because all the world-building elements have to be credible to the reader. For Russell, this credibility is key. She said the way to engage the reader is by establishing credibility with an authentic setting, with historical details, with nuances and a pace that is true to the era. This means eliminating everything that does not move the story forward, research, back story, even a favorite character. A writer should look for things to emphasize, create complexity, and sacrifice anything that is not relevant to the story.

This except is from the Fresh Ink March 2016 issue. The title “Tell all the truth..” is from a poem by Emily Dickenson.

Funny how people watch the same movie, and walk away impressed about different things. I never much valued the role of Elizabeth Swann in the movie series Pirates of the Caribbean. Ms. Swann had spunk, fabulous costumes, and her sweet young face did not distract from the yarn spinning of a pirate’s tale. To me, the movie series was a Hollywood romp.  I never thought seriously about the role of Elizabeth Swann until I read the blog by D. Hart St. Martin:

A Swann for the Dawn and the Sundown.

Hart recently finished writing the last book in her latest Young Adult trilogy and the protagonist, Lisen, has to rally troops to battle. Hart was quick to note that Elizabeth Swann made an impassioned, heroic speech in the movie because female protagonists in traditional male roles are re-occurring themes in her works. When I think of  speeches from females, I think of Elizabeth, Elizabeth Tudor, delivering her Tilbury speech in 1588. Aware that she was a female leader and unable to lead her troops into battle herself, she urges her troops to defend England against the Spanish Armada. She declares,

“I know I have the body of but a weak and feeble woman; but I have the heart and stomach of   a king, and a king of England too, and think foul scorn that Parma, or Spain, or any prince of   Europe, should dare to invade the borders of my realm: to which rather than any dishonor     shall grow by me, I myself will take up arms, I myself will be your general, judge, and rewarder of every one o 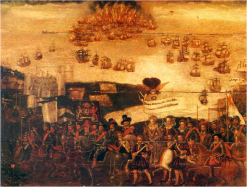 f your virtues in the field.”

Whew, what a long sentence. But I’m not gonna lie, just re-typing the words makes me want to reach for my sword…