The radio is non-stop commentary, and social media is buzzing. More gun violence. But it is different this week. There is less political posturing. People are emotionally exhausted, howling like wounded animals. Make it stop, they wail. When will it ever end? How can you not cry when peeling apart an emotional onion with so many layers?

The past months of continued footage of black men being shot (and being fed-up about it) as been an eye opener. Noah Trevor’s commentary explained my discernment process best. When he watched the video of a woman receiving 100 catcalls per hour as she walked around New York City, he better understood her harassment because with such a video, we can walk in someone else’s shoes. I read transcripts of the latest events because I have no stamina for the videos.

Imagine you had a writing exercise. The story starts like this: a mother, a child, and a man are pulled over for a broken taillight. The cop is white and the people inside the car are black. This is America. Escalate the tension and conflict.

The mother inside the car, Diamond Reynolds, posts live video to Facebook. The footage makes it easy for the audience to switch point of view. Her commentary runs like a documentary and is powerful story telling. Could I film such a deadly situation with her calm and assertive remarks? No way. It is obvious she knows the drill when dealing with authority figures. Reynolds’s young daughter is in the car during the shooting incident. When I learn about this after the incident, I am undone. I am gob smacked by the mother’s composure.

Switch the point of view to the Reynold’s boyfriend, Philando Castile, who will die in a few minutes. Castile had the sense to tell cop that he had a license to carry, and a gun. When else do you declare questionable items that may be found on your person? He follows directions slowly, reaching for his drivers’ license as instructed. 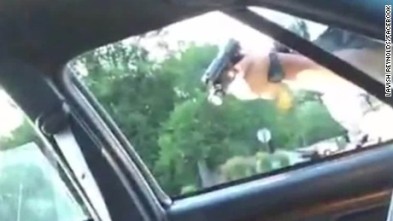 Let’s pan to the cop. He is overly agitated, his gun is shaking through the car window. Ordinary Americans have the right to carry guns and at such close quarters, in his emotionally charged state, the cop makes a snap decision about the character and intentions of Castile. The policeman shoots to kill as he is trained, discharging his gun four or five times.

There is one more scene to our little story, both an epilogue and cliffhanger to foreshadow sequels of dramatic episodes, with new characters yet to be announced. During a #blacklivesmatter demonstration in Dallas, a lone vigilante decides to administer his own brand of justice against repeated police shootings of black men. A soldier with past tours of duty in Afghanistan, Micah Johnson takes up a sniper position to target policemen patrolling the peaceful crowds. He shoots to kill. Johnson is chased down and cornered in a parking garage, but after a few hours the authorities lose patience with negotiations. They retort to a militarized response against the sniper, a decorated American Veteran. They roll in a drone with a grenade to blow him up.

It’s a sickening resolution of a crisis situation but a rather classic Hollywood twist. When I mention it, my teenager is unperturbed; he says they use this technique in Call of Duty video games.  I am a news dweeb and in real life I only heard of ISIL terrorists (or Palestinians) using explosive devices on humans. No more. Life is stranger than fiction.

Escalate tensions for future chapters. This is America, the wild, wild west.

Judy is from neither here, nor there, but those places in between. She is a cross-cultural writer whose works are unified by themes of identity and belonging. She escapes her suburban life by typing up stories, much to the dismay of her starving family. View all posts by jkConibear